Buy the original version of the book

Or, you can download the original version of the book through the link provided. Thank you for helping us grow a better and more beautiful world. 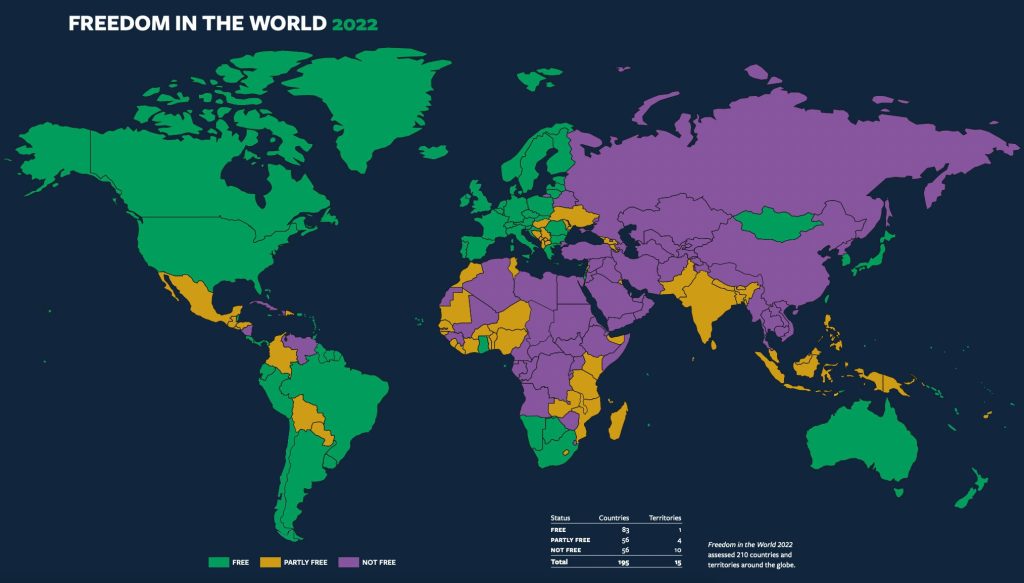 The above map is clear enough to show our current situation in the world.

Countries in the green color aren’t free! they are slave by banking system and credit card companies, and are governed by corrupt political parties who they think they elect, but the truth is big corporation and foreign power and lobbyist are the one who elect them.

We the people have been manipulated, lied to and Mislead to the point that the future of truth and misinformation online create a trust issue. People are so confused to trust anything, and that is exactly what these politicians are looking for.

Of course, the countries in purple and yellow color are ruled by dictators, gangs and drug lords, who we support behind the seen.

To start correcting the current situation we need a international movement TTUN.org.

TTUN.org movements start in the United States of America, because US citizens are the only people who are protected by their constitution, and have the freedom and liberty and weapons to protect their rights.

Have you ever asked yourself why there are so many corrupt people that want to get in to politics and government? So much that the good people in the government can’t do anything about it.

Let’s look at their benefits:

But they say they are doing all of these for us the people.

There are too many corrupted politicians throughout most governments around the world. That corruption has affected our elections and interns our lives. These people are supported financially, on national and international entities who they control banking, news, and social media. Their only purpose is to deceive the people and bring their chosen puppet to power so they have access to military and other financial resources, which it will bring them power. The United States is the last country on earth that these corrupt powers have to take over. If they succeed, it will be the end of freedom and liberty for humans around the world.

At this time our trust in government has been declining every day. The health of our democracy affects the democracy all around the world. Consequently, voter anger causes politics to move beyond a competition of ideas and philosophies and into a hate game in which each sides gain is the others loss. That weakens people’s commitment to the democratic norms and values that have long been the motto of the U. S. Political system. Tolerance And respect for minority opinions has slowly become supporters of the opposing political party and are portrayed as less intelligent than yourselves. Arguably, more harmful for democracy, anger also makes people see supporters of the opposing political party as a threat to the country’s well-being, which is exactly what the corrupters want you to see, believe and act on.

Step One , Unite, Power to the people! It will be in the constitution

What we propose is The True United Nation (TTUN.org). Platforms where we can get unite and in one place you can change things to benefit all the people and future generation. This is a roadmap for people around the world. We are identified as the “exhausted majority”. We are voters around the world that have been divided into traders and patriots. If we continue in this trajectory, we will become pointless. History has shown that governments on the top usually become dictatorships. “We the people “should always be on top of the government. If you are ready, here’s how we can change things. United we stand, divided we fall!

When our forefathers formed this country, they had these same ideals in mind. Somehow, we have drifted far beyond and away from those idealistic notions. Our founders did not fathom the idea of technology and how powerful the media, news and Internet would become. So, the problem is the constitution, we need to update and correct the constitution to today’s technology. “We the People “not the politicians. “We the People “will have the power to Government Spending, election, news, Internet, Healthcare and the Education. This amendment will change the shape of the government to become the small servant to the people, and have to answer directly to the people.

Artificial Intelligent is becoming a mainstream technology that will need to be effectively integrated into 21st century decision-making across all institutions— especially government. In the wake of this digital era, we use every tool necessary to keep the government powerless and small. 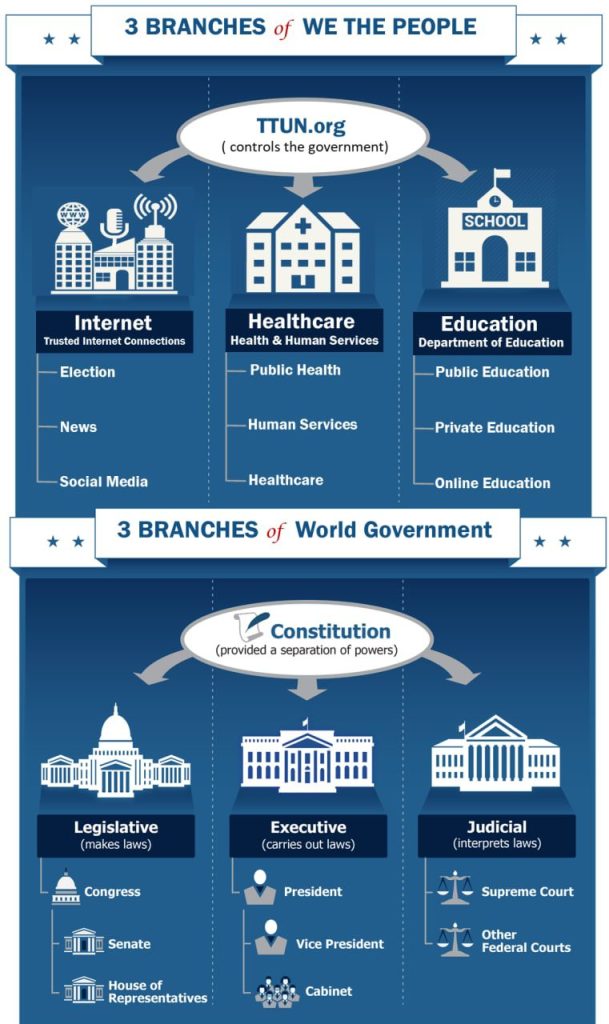 We the People Establish

To Promotes Education, Peace and Wealth for all humans through Productivity.

We the People of the Earth, in Order to form peaceful plant, perfect Countries and Union, promote Term limits on all political positions, promote secure election for all Political positions, establish Justice, law & order, ensure people to keep and bear arms for domestic tranquility, and to promote for the common defense, promote free secure internet access for all, promote real news channels for people by the most secure and trusted source. Promote the general welfare for the mentally or physically disabled, and secure the Blessings of liberty, freedom and independence to ourselves and our Posterity, for all people do ordain and establish,

ttun.org has one objective, Unity among all humans. We are not connected to any government or entity other than people. We will build an organization by the people for people.

We the people of the earth have come together to achieve peace and harmony between ourselves, regardless of our nationality, religion, race, color, sex, age and ethnic background. We all agree that there is a higher power that brought us to this world and created all matters and this is our common sign of unity. We all accept our differences and we would like to create a world with harmony and peace and equal right for all humans around the world.

Accordingly, our respective Wise and educated, through representatives assembled in TTUN.org and establish an international organization to be known as The True United Nations.

AND THIS IS THE BIGGINING OF THE TRUE UNITED NATION.

AND FOR THESE ENDS

To practice tolerance and live together under law & order in peace with one another as good neighbor do.

To unite our strength to maintain international peace and security, and

To ensure, by the acceptance of principles and the institution of methods, that armed force shall not be used, save in the common interest, and

Civil and political rights by the people like the right to life, liberty, free speech and privacy. It also includes economic, social and cultural rights, like the right to social security, health and education, Internet for all.

Step two, All the countries in the world follow the same patterns

Second, we will unite the rest of the world. In terms of liberty and justice for all, our nation moves forward with the newest technology, that become the main stream technology that be effectively integrated into all 21st-century decision making across every institution, especially government. This will disable the corrupt political graft forever. We are going to lead the people of the world to freedom and liberty, and will show them how we stand and fight for our rights. We’ve created a channel to unify people. This is what all dictators are afraid of, unity of their citizens! Our unity in freedom will not pass to our children in the blood stream it must be fought for, protected and handed down for them to do the same. We are going to promote education, and peace and wealth for all human through productivity. We will assemble wise and educated representatives in TTUN.org and establish an international organization to be known as The True United Nations. The united nation that exists today is actually the united governments and do not represent the people of their respective countries. As a result, they should be dissolving or move to an organization that represents all of “we the people “.

We will achieve the following motto:

We the people of the earth, in order to form a peaceful planet perfect countries and union, promote term limits on all political positions, promote secure elections for all political positions, establish justice, law and order, ensure people have the right to bear arms for domestic tranquility, and to promote for the common defense, promote free, secure Internet access for all, promote real news channels for people by the most secure and trusted sources, promote the general welfare for the mentally and physically disabled, and secure the blessings of liberty, freedom, and independence for ourselves and our posterity, for ALL people to ordain and establish; The True United Nation.

We will unite our strength to maintain international peace and security.

Step Three, Human migration starts to save the earth for the future generation

There are facts on this world that we can’t ignore or denial.

First, we have one home, Earth. And if we don’t take care of it, we all suffer sooner or later. Our responsibility to make sure it is been taking care of for us and for the future generation.

As it is like a dream for most of you to imagine the one world organization, but it is easier than what you think.

We all have to participate in to shape this new world.

Powered and Design By The True United Nation-TTUN